The Ebbsfleet Engineering Services team were extremely proud to be selected by Bollegraaf to undertake the complete mechanical installation of their landmark fibre sort facility as commissioned by Ward Recycling Ltd, Hartlepool.

To ensure that we had a full understanding of their requirements and the equipment to be installed our Project Manager, Steve Allsop, spent a week in the Netherlands with the Bollegraaf manufacturing and project teams.

The time lapse video below shows the installation of the plant which includes seven Pellenc optical sorters, a drum feeder and bunker along with an OCC screen and recovery line

The installation project commenced on 10 September 2018 and completed 09 November 2018 with a small team returning to site towards the end of November to assist with warm commissioning.

“ …..this is 2 jobs you have completed now, the first was good, the second was perfect in extremely difficult circumstances.  I am more than happy to recommend you guys, and believe me I don’t do that often!!"

The installation has recently been featured in industry magazine Letsrecycle and you can read more about it here: https://www.letsrecycle.com/news/latest-news/working-in-partnership-for-paper-quality/

A serious fire in August 2014 damaged the Mechanical Biological Treatment (MBT) plant to the extent that one of the three lines at the plant was non-operational.

Ebbsfleet Engineering Services’ involvement began in October 2014 to carry out some important safety works in order to permit an in depth survey of the plant and building.

Following the conclusion of the survey Ebbsfleet Engineering Services were invited to tender for the removal of all plant items from line one and stripping off the damaged roofing and external cladding.

Additionally Ebbsfleet Engineering Services also carried out the role of Principal Contractor and were responsible for the removal and safe disposal of all scrap plant items, utilities infra structure and damaged building fabric.

All works were completed on time including the sub contract packages.

Following completion of the initial contract, Ebbsfleet Engineering Services were requested to supply personnel and plant for a further 12 months to support the rebuild of the MBT plant; undertaking works such as contract lifts for new trommels and filter plant, overhauling and balancing of fans, installing new wheel guides and relocating A-frames. 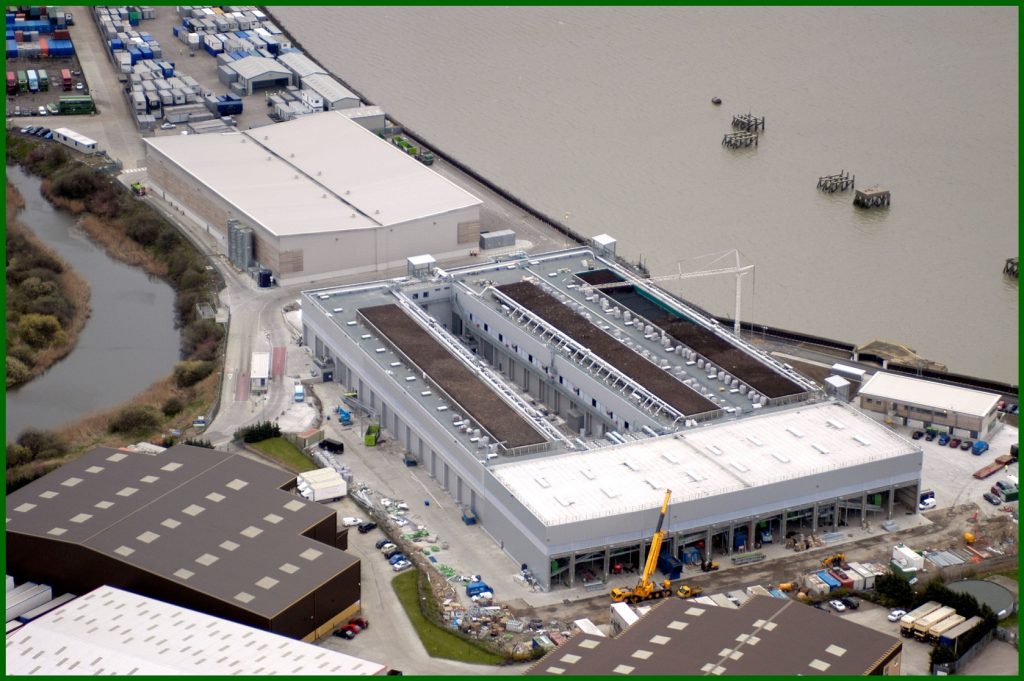 The CDM Regulations 2015 have generated a good deal of discussion and debate over who might legitimately be appointed CDM 2015 Principal Designer, particularly on larger construction projects.

These questions are not addressed directly in the Regulations nor in the HSE or Industry Guidance and there has so far been no published clarification provided by HSE.

Principal Designer must measure up to template.

In the absence of further HSE guidance it is suggested that project clients must check that the appointee can (and does) take the actions and demonstrates the behaviour required of the Principal Designer as set out in the CDM Regulations 2015 and the HSE / Industry Guidance.

The central requirement is that the Principal Designer must be a designer appointed by the client with control over the project pre-construction phase (PCP) in order to plan, manage and monitor the PCP and coordinate matters relating to H&S during the PCP.

The Principal Designer must have the skills, knowledge, experience and organisational capability, necessary to fulfil the role.

It is also essential that the client project management arrangements include the allocation of sufficient resources for the appointee to undertake these extensive and new Principal Designer duties.

Fires are classed into 5 different categories:

Electrical fires are not included, as they can fall into any of the classifications 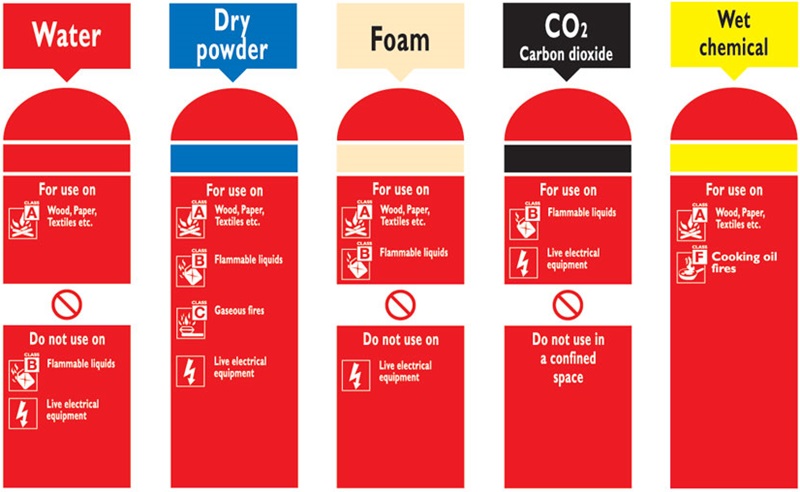 Usually Coloured: Red / Contains: Water  (Category A Fires)
Should be used for materials such as wood and paper. They MUST NOT be used on fires involving electrical equipment or oil.

Usually Coloured: Black / Contains: Carbon Dioxide (Category B and Electrical Fires)
and
Usually Coloured: Blue / Contains: Dry Powder (Category A, B, C and Electrical Fires)
Are both normally used on burning liquids. They are safe for use on fires involving electrical equipment. Neither of these extinguishers have a cooling effect, consequently they are not recommended for use where there is a high risk of re-ignition. Use carbon dioxide extinguishers in well ventilated areas because they reduce the amount of oxygen in the air.

Usually Coloured: Green / Contains: Halon  (Category A Fires)
Less Frequently seen, but possibly still in circulation.  Can be used in most instances including use on electrical equipment. They are recommended for use in the open air or in well ventilated areas because of their toxic properties, so do not use in confined spaces.

Because fire extinguishers cannot always be identified by their colour, do not use them without first reading the label.

If you discover a fire:

-  Get everyone out as quickly as possible and call the fire brigade.
-  If the fire in its very early stages, and you feel confident to do so, attempt to extinguish it with the appropriate extinguisher.
-  Always ensure that you have a clear exit path available.
-  Fire spreads very quickly. Even a small, contained fire can quickly spread, producing smoke and fumes which can kill in seconds.
- If you are in any doubt do not tackle the fire, no matter how small. You can put yourself at risk by fighting the fire.

If in doubt, get out, stay out and call the Fire Service.

More information of fire safety can be found here

Providing an excellent, safe, value for money service is, and has always been, a priority to us, but it's not something that we've formally monitored.... until now!

Historically, we have used indicators such as the number of return clients, word of mouth recommendations, testimonials, project progress monitoring, and obviously speaking with our customers throughout their project(s) to let us know how we were doing.

So, to further improve these measures we have this week  introduced a customer satisfaction survey which will be sent to each customer following the completion of their works.

Keeping in mind that time is always at a premium we have kept it brief.  Just 10 quick, tick box questions, covering aspects such as quality of works, safety,  how well we met expectations and our personnel.  All questions are optional, and can be submitted anonymously if preferred.

Responses once received will be analysed and used to identify where we can make tweaks, improvements or changes in order to ensure that we are, or continue to be your first choice supplier. 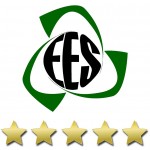 "SGN has used Ebbsfleet Engineering on many occasions, including for the removal of large counterweights on four of our mothballed gasholders in some demanding conditions. I found Ebbsfleet Engineering to have good company values, an innovative approach to problem solving and above all, a safe, competent and professional workforce."

The gas holders to which he refers were located in Canterbury, Oxted, Burgess Hill and Ashford. Each of the 4 gas holders had 8 off, 3t counterweights.

The removal was necessary due to SGN's concerns that the counterweight system was slowly degrading and for safety reasons should take place prior to further decisions being made as to the future of the gas holders.

In order to achieve the safe removal of the counterweights, we designed and manufactured a special 5t hydraulic winch with breaking system.

Each counterweight was individually lowered from a height of approximately 40m to ground level before being loaded and transported to a licensed waste management company.

Works were carried out by our own SC01 & SC02 qualified engineers, with each gas holder taking 3 to 4 days to complete during the clients 6 month program.

More projects undertaken for SGN and others can be found here 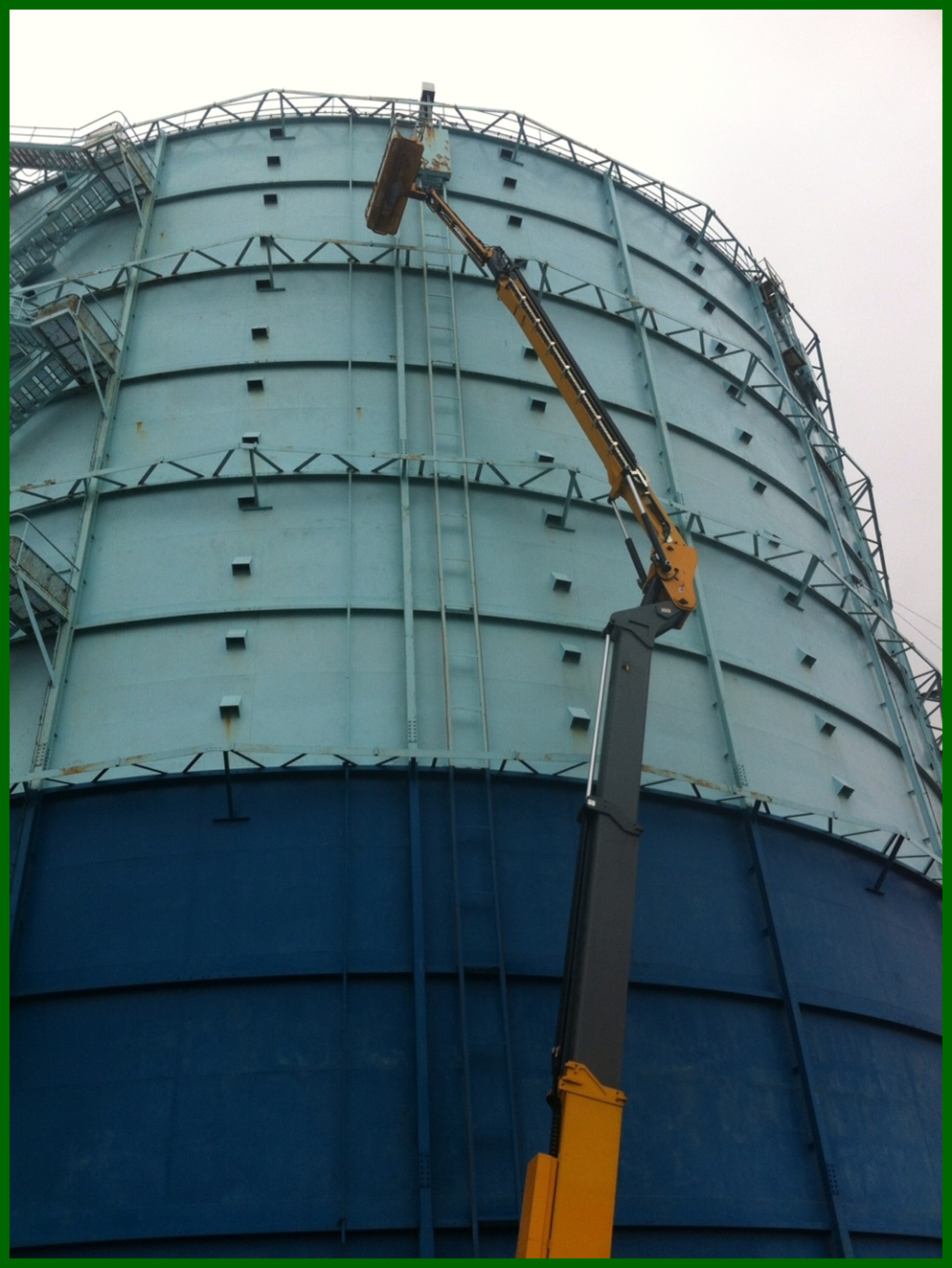 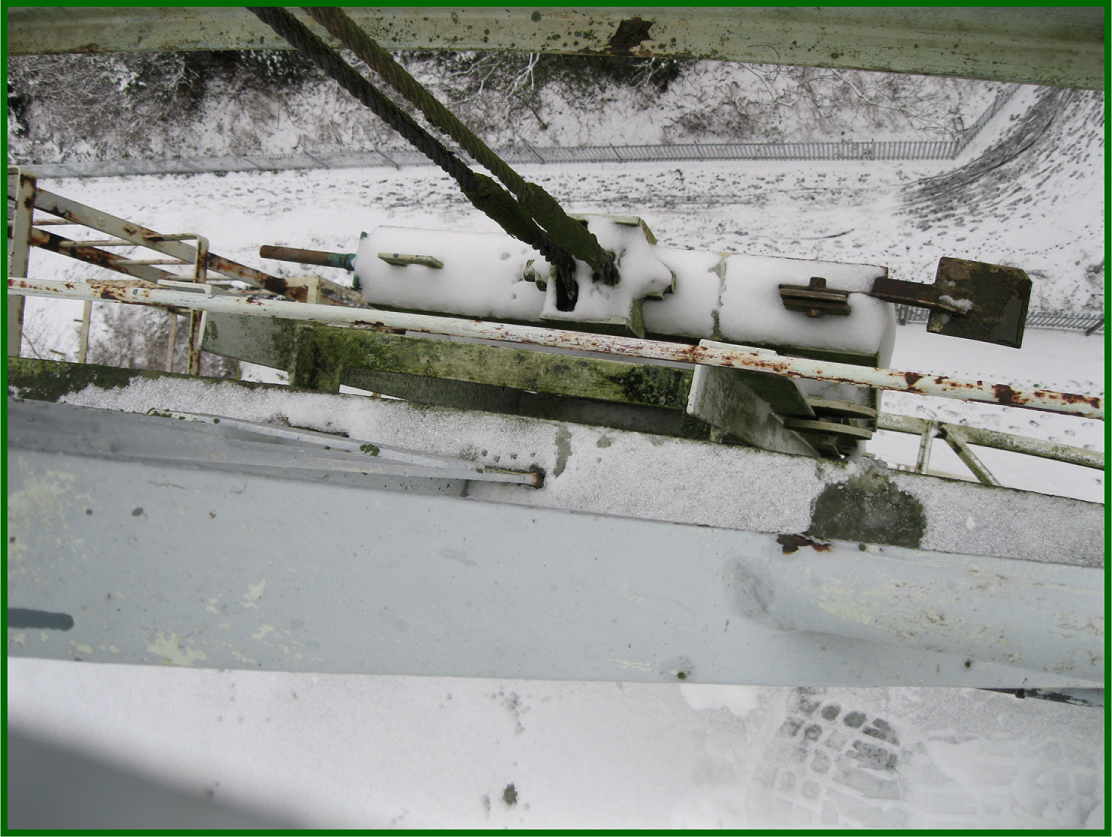 Do you know your safety signs?

There are four main types of safety sign in the UK, each of which has a basic colour:  RED, YELLOW, BLUE OR GREEN. 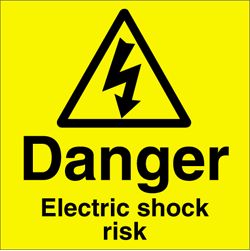 Ban certain actions. They have a white background with a red circular band and crossbar.

Have a black triangle on a yellow background, with the symbol or text in black.

Give instructions. They have a blue background, with the symbol or text in white.

e.g. Head Protection must be worn.

Are square or rectangular in shape, with a green background and the symbol or text is in white.

Before you use any plant or equipment on site it is vital that it is inspected and any faults found are reported according to the protocol of the company for whom you are working - usually this would be to your site supervisor or manager.

There should be daily or weekly inspection reports on which to record the findings.

Your equipment and plant checks should cover the following areas:- 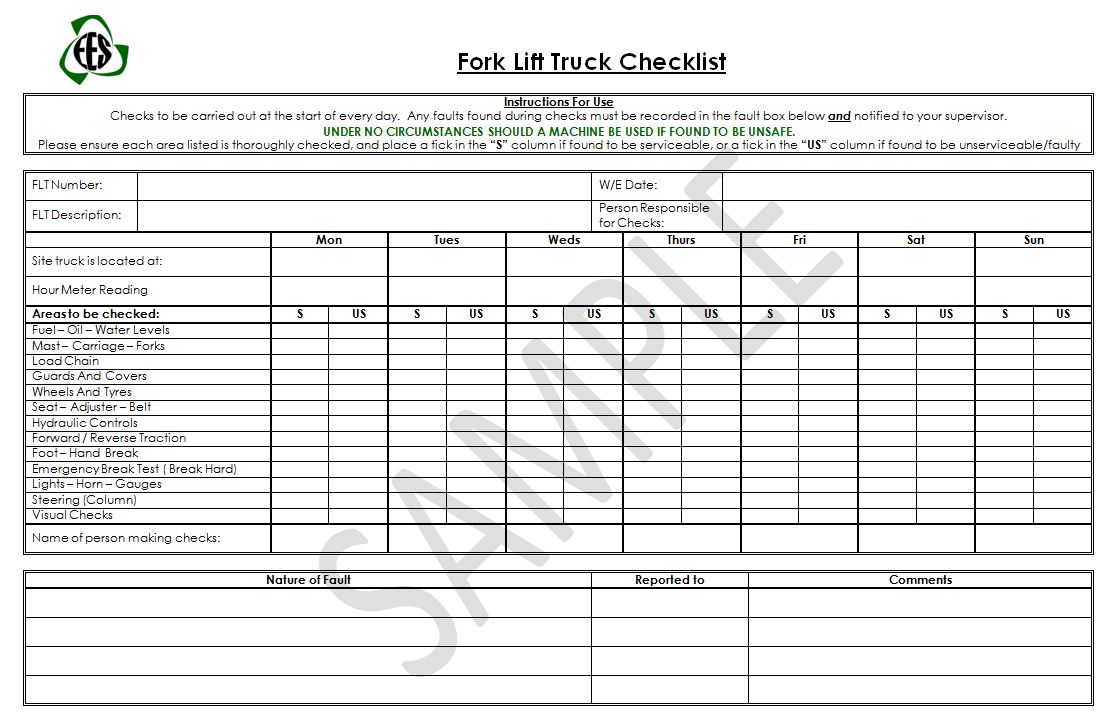 More information can be found here

Mechanical and electrical engineers were supplied by ourselves along with all required tooling and plant.

Prior to dismantling, a complete survey was performed by both the Mechanical and Electrical teams.

A detailed written and photographic record of was then produced to assist the re-installation in South Korea.

Upon completion of the report all cabling was match marked, labelled, removed and packed for onwards shipping.

Weak floor areas in the press hall were strengthened from below by placing 10t Acro Soldiers in the basement area beneath thus strengthen lifting load point areas.

The press, including slitters, winders, the boiler and all spare parts were then systematically match marked and the dismantling process commenced utilising amongst other plant 2 off 10t forklift trucks with jibs.

All items were recorded as to skid number and container number to ease identification of parts in South Korea.

During the 8 week project a total of 48 containers were loaded and shipped on to South Korea.

Rusty is the affectionate name for our resident recycled robot.

Commissioned in 2012, and created from assorted metal items that were destined for the scrap heap, his components were rescued and cleaned and with a little imagination and a fair few welding rods, Rusty was "born".

Standing at 5’ 6” tall with broad cog made shoulders every glance at him spots something different, maybe a teapot or a gardening fork, an assortment of spanners, or a pedal, a plug socket or a lucky horse shoe.

Rusty can usually be found in pride of place, ready to greet visitors at our head office reception, however many of you may have already met him at our exhibition show stands where he always attracts far more attention than the personnel staffing the stands!

Rusty also has his own  Facebook and Google+ profiles, as well as sometimes popping up on the company Twitter and LinkedIn feeds to wish you a happy New Year or pass on the greetings of the season. 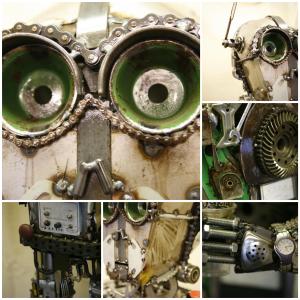 Feel free to follow or pop in for a visit to see what you can spot!